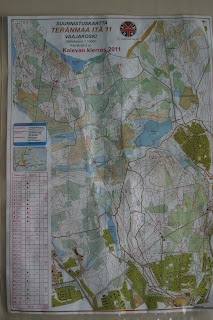 18.2 km
The weather forecast told all the essentials from the day of 24th of September 2011. Humidity 100%, temperature +7 degrees, occasional showers, wind 5 m/s. It was time to start long distance orienteering competition at Vaajakoski. There were 18 km course waiting us as a last sport event on this year's Kalevan kierros. 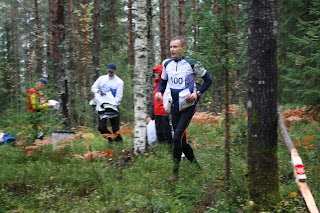 Approaching control point
Alltogether roughly 300 participants started at a mass start either for 18 km or 10 km track. Despite of the high number of competitors starting at the same time, the course planner had done a superb job! The parallel courses provided splitted the runners effectively and I was running the whole course after second control point practically by myself. 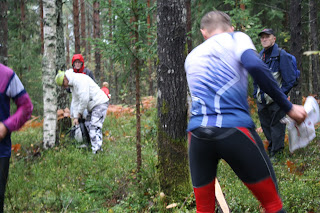 Punching at control point #9
The terrain was wet and slippery due to constant rain during the previous weeks. It was cold, but as soon I started running I felt warm. The running speed wasn't the best, but anyhow I was happy about my orienteering skills at this race. No big mistakes at control points. There were some not optimal route choices I made between control points, but I was extremely happy after finishing the course at a time of 3 hours and 34 minutes. 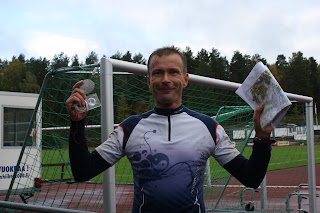 From Tiinanmäki through B-Final to C'est La Vie 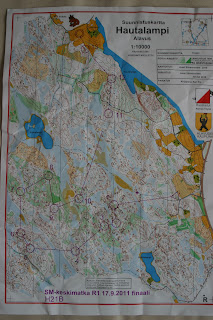 Map of B-Final
At last weekend I was attending a Kirmaisu-event at Alavus with 4 other guys. The plan was to enjoy the weekend in a cottage near the place, where Finnish Orienteering Championships in a middle distance was arranged. On a Friday we drove to J's cottage, run a 1 km "Tiinanmäki" test-run and had a relaxing sauna after it.
Early on Saturday morning had a decent breakfast and right after it 3 of us cycled into a race center of Finnish Orienteering Championship and got prepared for the 3.7 km qualification run. I started among the first ones at 9:00. I made a huge mistake at control point #4 and also the running speed wasn't too good for me, cause I haven't had a possibility to run and exercise during summer, when I have been paddling the Finnish coastline.
There were 3 hours between qualifications and the B-final, which we used effectively by cycling back to the cottage, eating a lunch, resting a bit and cycling back to the race center. At 13:00 I was starting again for the second race today, 4.9 km B-final. The running speed wasn't increased from the morning, but the orienteering went much better and smoother than in the morning. This was my first personal national orienteering competition and my first ranking points ever.
On Saturday evening after the competition had a great dinner, hot sauna and concert offered by Anna Puu.
Lähettänyt Antti klo 4:17 PM No comments:

The previous week was full of guiding courses and tests. 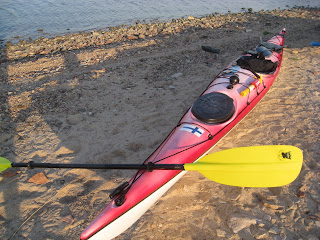 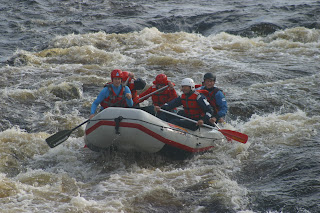 Right after Paddling Guide test I had 4 - day Rafting Guide course at Rovaniemi, which culminated into a test in a rapids of Vikaköngäs. Everybody had to successfully guide and steer the raft through a pre-defined track in a rapids. In addition of this test everybody had to successfully capsize the raft and re-right it with the help of flip-line. The 4 - day course was a tough one and when I managed to pass the test on Sunday I was really happy, but tired. I have been resting the beginning of the week and recovering the paddling in the rapids. We have still one part of the Rafting Guide course left, which is theory as a written exam. The exam will be made in our next period at Rovaniemi within one month.

All in all this summer has been dedicated to water activities with paddling the Finnish coastline, taking Paddling and Rafting Guide courses and visiting on a 10 new lighthouses by kayak. Despite of the focus on the water activities I have managed to nearly complete Kalevan Kierros with 4 sport events. I have still 2 orienteering competitions / events on the coming weekends. Tomorrow will be running in a Finnish Orienteering Championship race in a middle distance and after one week completing Kalevan Kierros by running 18 km orienteering race at Vaajakoski.
Lähettänyt Antti klo 2:04 PM No comments: 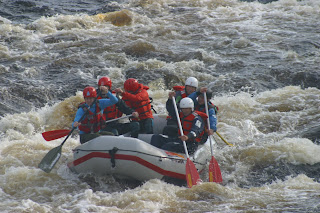 In the rapids of Raudanjoki
4 - day rafting guide course is now half-way. After two tough days at white water near Rovaniemi, I have found many new muscles on my upper body. Tomorrow we'll be heading to Tornionjoki, where even bigger rapids can be found than in the neighborhood of Rovaniemi. 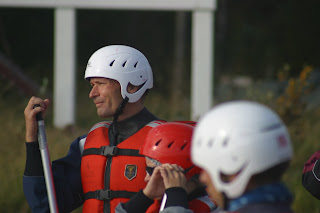 Safety equipment : helmet, PDF
Vikaköngäs rapids have been ideal for practicing rafting and learning to guide groups, who want rafting experience on inflatable rafts. We have managed to get multiple runs for everybody to learn and practice the behavior of rafts in the rapids. It was even possible to practice raft racing on slalom track, which was built for the race held next weekend. 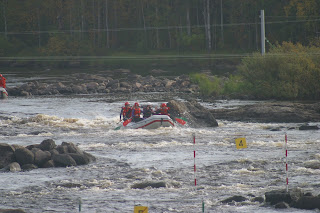 Slalom track gates
In the end of the day there were a possibility to practice capsizing the raft and re-righting it with flip line. 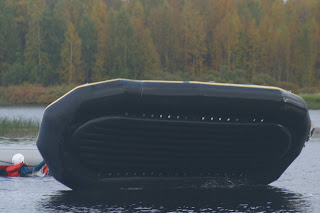 Märket dialect has been invented 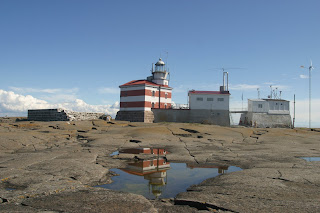 It has been a typical Märket weather today. A bit of everything like wind, waves, clouds and sunshine. Waves have been increasing during the day and the islet has been shrinking at the same pace. However there has been still enough solid ground to work outside and even do the jogging exercise around the island.
Today we have been doing compulsory maintenance and shift changing tasks like cleaning the places and emptying compost after one week shift of 5 people. So the preparation for tomorrow's change is right on schedule. 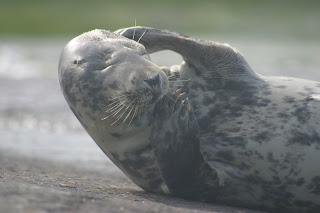 The seals have disappeared from our sight perhaps due to strong and intensive waves hitting continuously the shore of the island and making it harder to get ashore. However the amount of ships and ferries sailing between Märket and Understen has not been affected in any ways, there is a constant line of big cubicles on the western horizon moving to north or to south. 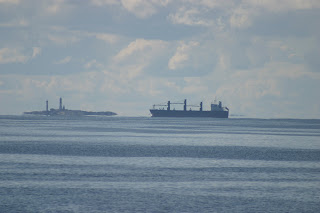 We have been enjoying the last day and the evening here by having the final great sauna experience with swim in the middle of blowing wind and wet waves, baking apple cakes and just taking easy and relaxed. We have had a multiple phone calls to mainland to give instructions for ordering more paint for the ceiling, walls and the floor of the first floor rooms.

It's amazing how time flies, cause it feels we just arrived a moment ago, but actually it's already one week since we entered Mats' boat in Eckerö. Most probably the wind is blowing from the north tomorrow and therefore the change will happen from the south side and from the southern harbor. Today when we have looked at the sea and the behavior of the waves it's hard to believe we could get out tomorrow. Waves are circling around the island and meeting each others exactly at the point of southern side and building a pacific like surfin' waves. We are just lacking of surfboards to enjoy the waves. Ride on!

Yesterday we lost the last car tire we had on Märket. Tires have been used as fenders for the boats docking to northern or a southern harbor. So we had to do a phone call to mainland again and make the order of the new car tires. It seems sea is cruel at these stormy waters and swallowing everything which is not bolted firmly onto a strong granite rocks.

It has been an educational week as well for the Finnish speaking crew. Monica and Christer has been teaching for the rest of us many useful Swedish words, sayings and phrases from "gäspande gepard" through "mögel möbel fågel flygel" to "räven raskar över isen". Now we can survive even at the most Swedish speaking part of Åland with these phrases. There's no matter which language the crew members are speaking when coming to Märket, because after one week we all have adapted to new language called "Märket dialect" and everybody can speak and understand fluently this ultimately beautiful new language. As an example dialect includes words like "suklata", "plastrata" and "lorare".

We all wish that we can come back one day and have the chance to feel this special atmosphere again. Goodbye now, but see you soon again!
Lähettänyt Antti klo 11:42 PM No comments: