On a thin ice 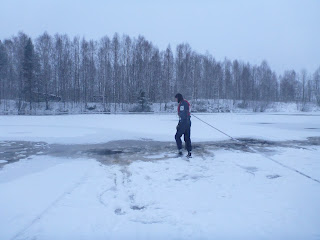 Walking on a thin ice
After skiing at Saariselkä 5 days, I took a bus to Rovaniemi early on a Thursday morning and joined other students for the 15th school period of Nature Experience Instructor studies. The theme for this 4-day period was firstly to learn safe practices on a thin ice and secondly do couple of courses and exams related to safety and healthy practices at travel business. 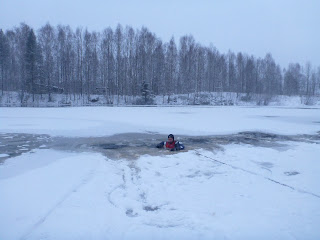 Getting out of the freezing water
In addition of subjects already mentioned we had our traditional night shift of kayaking at swimming hall. This time we had a privilege to practice series of crazy and weird tricks with kayaks. 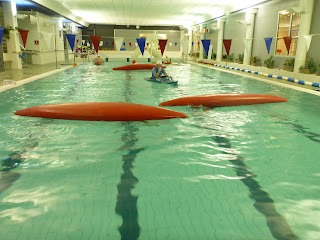 Capsizing kayaks
E.g. we practiced how to move kayaks by swimming with our hands, when the kayaks are upside down. And how to do it with pairs and even with our eyes closed. 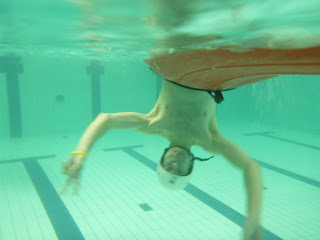 Under the water
Lähettänyt Antti klo 7:00 PM No comments: 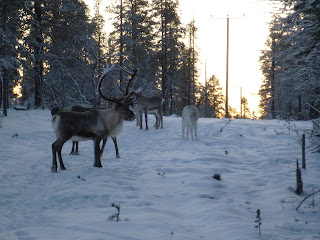 Welcome to Saariselkä!
Tampereen pyrintö sporting club has been arranging ski camp at Saariselkä last 10 years at this time of the year. This year I decided to join them and on Friday we headed towards Saariselkä in the hope of snow and skiing possibilities. It has been very warm recently in Finland and thus the snow hasn't fall down yet to Southern part of Finland. We had to drive until Sodankylä to encounter first snow on the ground! 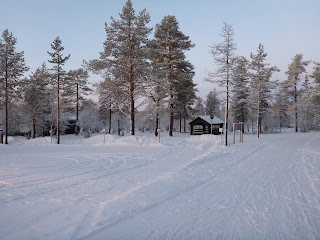 Snow at last
It has been nice to ski first kilometers, but at the same time tough, because body has not been used for it. The muscles on my legs, arms and back are realizing the usage of different muscles than before. We have faced reindeers on the ski tracks, enjoyed smoke sauna and dip onto frozen river after ski exercises. However Santa Claus has been hiding and he has not been skiing at this area. Perhaps we see him during the rest of the week! 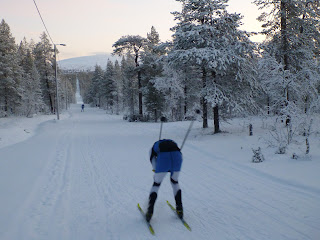 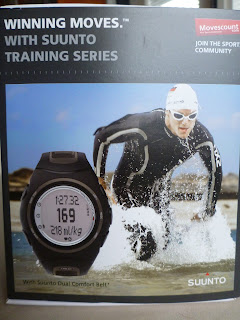 T6d Suunto heart rate monitor
Now it's the time of the year for giving awards and prizes for those, who have succeeded well in races and competitions throughout the year. E.g. paddling club Vihuri remembered the talented and gifted paddlers who have succeeded in world cup and different championships during the summer time. Well, I am not competing, but it was nice to notice that even paddlers, who mostly do it only for pleasure and as a hobby were considered equal to competitors. I was awarded because of paddling Finnish coastline this summer by the "Light on sea" - book, which introduces Finnish Lighthouses during the years 1753-1906. Those lighthouses were guiding my paddling trip and giving safety and shelter on a constantly changing conditions.

At the same time Suunto heart rate monitor, which I won a couple of weeks ago were delivered to me.

Now it's time to take skis from the warehouse and head to the Saariselkä for skiing... 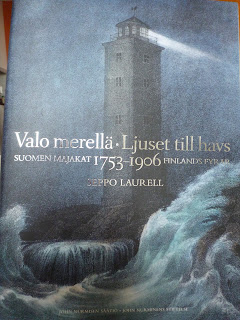