The big surprise was that circus has been coming to town! It was Russian circus, which I could believed to see in Helsinki, but not in Orange Walk town in Belize. However it's not my thing and I just skip it. Instead I was having a Lamanai tour today... 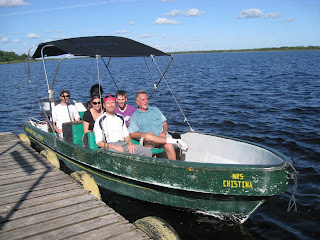 Boat trip to Lamanai Maya ruins were amazing. Carlos was a really experienced guide. He could see and point out the animals from the boat so far away. On the way to ruins we saw Crocodiles, Spider Monkeys, which we feed with the bananas. They were coming all the way down to the boat. 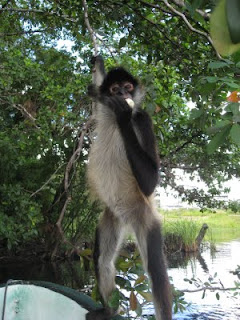 We saw some giant orange Iguanas, and lots of different birds, like black vultures and Jesus Christ birds. There are four different species of vultures in Belize and black ones are most common. King vulture is rare and is as big as condor. Jesus Christ female bird is going from male to male and giving eggs to each of the male to nest and raise baby birds.

Local fisherman on the river had bunch of fishes and there were even a rifle on his boat. Carlos was explaining that hunting is allowed as well and the locals take the guns with them when doing fishing and hunting.

On the site saw some howler monkeys, which were howling like a wolfs. Lamatai Maya site is quite remarkable, only 2% of it's buildings has been restored. There are over 1000 buildings and the area is large, where they have been living. There were couple of nicely restored temples, mask temple and jaguar temple. the highest temple reached 33m high.

When coming back to lodge there were this 4 meter long crocodile on the shore just 10 meters away the terrace of the lodge and the local guy was feeding it. 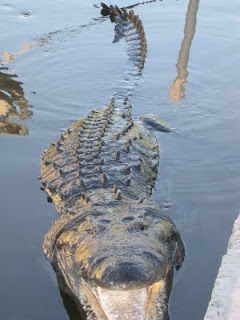 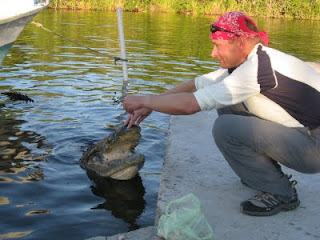