Today I made a bit faster exercise for the coming Jukola relay. I jogged to Ratina stadium and did a Cooper 12 minute test. The physical shape was just what I expected, far away from the best I have had. I managed to run 2850 meters in 12 minutes, which is just barely acceptable.

Jukola relay will be held this year on a terrain, which demands a good physical condition. That's not good news for me! I'll try to do my best and start exercising again to get onto better shape for the coming years...

Today I joined Tampereen Pyrintö sports club as well to start a more active life. Let's see how my physical condition will evolve over the time. I'm not ready for Jukola, but I'm ready to start doing something that I would be ready next time.
Lähettänyt Antti klo 4:04 PM No comments: 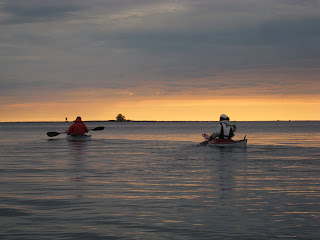 Heading towards the sunset and the open sea
At the weekend made a kayaking trip to the Kvarken at Baltic sea. Kvarken archipelago is a world heritage site. At friday evening we drove near Vaasa and started kayaking at 9PM in the evening. The weather was beautiful and sea was calm. We had 4 hours paddling head of us before reaching the outernmmost Strömmingsbådan lighthouse island at 1AM at the night. There were practically no wind at all and the sea was calm and still. The sun was setting beautifully and kayaking felt awesome. 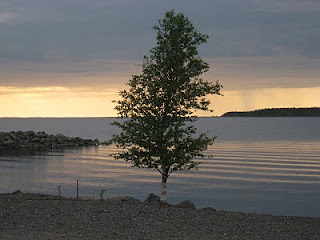 Lonely birch looking at the sea
It took for awhile to set up the tents and take the night photos. I tried to sleep after 3AM, but
when wind started to strengthen it hit the tent powerfully and made the noise, where it was difficult to get sleep. 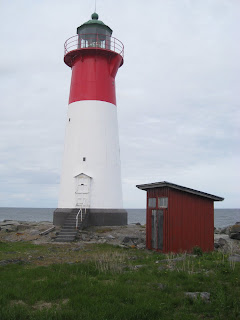 Lighthouse
Saturday and sunday were days with the heavy winds. Temperature was a bit over 10 degrees and saturday was rainy. It was blowing 10-13 m/s and the paddling were much harder at the rough conditions. However it was good practice for paddling at such conditions at the sea and to realize it was still possible to paddle although waves were sometimes even 2 meters high.
Now Strömmingsbådan lighthouse has been visited by kayak. Strömmingsbådan might have my 10th lighthouse at the Baltic sea visited by kayak. Hopefully this summer I have a chance to visit other lighthouses still...
Lähettänyt Antti klo 12:06 AM 2 comments: