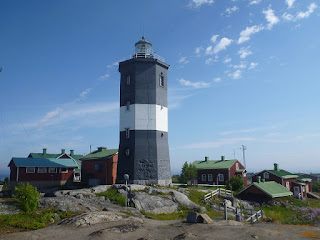 One of the objectives for this year was to visit on Norrskär and Utgrynnan lighthouse islands by kayak. The islands are very remote and there are absolutely no shelter at all for stronger winds or bad weather. After the midsummer I checked the weather forecast and it looked pretty OK.

The Monday would be still windy, roughly 5-7 m/s from SW, but Tuesday would be perfect day for visiting these islands.

I decided start on Monday at the southernmost tip of the Raippaluoto island towards Rönnskäret - archipelago. On a way I visited Ensten daymark island and started a long, windy and tough crossing over the Gloppet. It took 4 hours to reach Rönnskäret islands and I was totally exhausted. Rönnskäret has old daymark as well and nowadays it's having nature center in one of those islands. The major part of the Rönnskäret archipelago is nature conservation area. 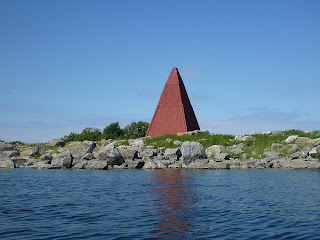 I pitched the tent in a stony shore of the Storskäret island after 35 km paddling. I was feeling the headwind section in my shoulders.The first day route can be seen here. 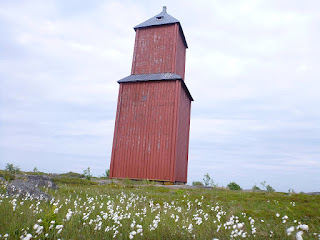 At 6 AM my alarm clock rang and I started to prepare for long open sea crossings. I had a decent breakfast and packed my tent and other stuff in my kayak and started paddling. It was 17 km crossing to Norrskär - lighthouse island ahead of me. The wind had calmed down, but it was misty and foggy. After 2,5 hours paddling I was wondering why I can't see lighthouse anywhere. According my GPS it should have been some 1 km away. I was pondering if I had stored wrong coordinates by mistake. Then suddenly when it was only 400 meters to lighthouse it appeared in the middle of fog, oh boy I was relieved. 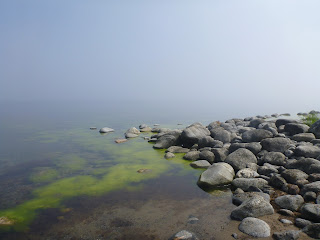 Rocky shore, misty and no wind at all

I had a good break at Norrskär, it cleared and sun was shining. I took photos, ate some snack and checked the next crossing. This time 15 km to Utgrynnan - island. I started paddling again and fog appeared again. Similarly after 2,5 hours paddling I was wondering where lighthouse would be, cause it was only 200 meters and I couldn't see it or the island. I was already bypassing the island totally, when on my right hand side there were glimpse of lighthouse in the middle of fog. Unbelievable! I could see the island and lighthouse at 200 meters distance. Without my GPS I couldn't have find the lighthouses, which at normal conditions can be seen from 5-10 kms away! 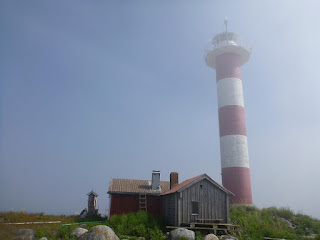 I had lunch on Utgrynnan and the last leg of today's crossings were still ahead. 17 km back to Raippaluoto - island was still waiting. All in all I paddled 87 kms during these 2 days. I'm extremely happy I managed to visit both Norrskär and Utgrynnan - lighthouses.They were my 34th and 35th lighthouses in Finland visited by paddling. The second day route and mainly open sea paddling is available here.
Lähettänyt Antti klo 6:08 PM No comments: 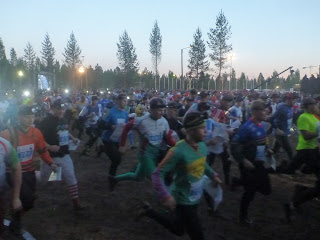 The start at 11PM

It was my 9th Jukola relay in a row, since 2005. I was hoping to run either 1st, 2nd or 5th leg, because those were the legs I haven't had a chance to try in earlier races.

The original plan was to start a relay in Tampereen Pyrintö team, but last minute changes moved me onto a 2nd leg. It was quite dark just before 1 AM, when I got the map from the 1st leg runner. The first control point was quite far, but it was nice and easy orienteering at the beginning. 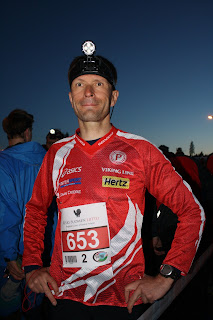 After 3 km run on a flat terrain there were a steep and long climb, after which a bit more demanding control points. Despite of darkness all went well so far, no problems at all.

Roughly at 6 km from control point 12 onward I had huge difficulties. I lost at least 15 mins during the next 3-4 control points. The latter half of the 13 km leg was just tired running towards finish line. The goal was just to complete the leg and to get to sauna to warm up and to wash myself.

This was the poorest and weakest performance of the Jukola legs in my orienteering history since the first Jukola on 2005. Next year again :)
Lähettänyt Antti klo 9:57 AM No comments:

830 km by bike during the last two weekends. 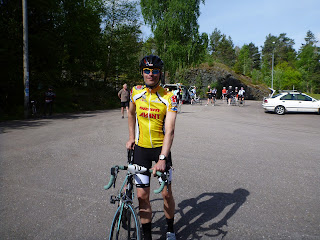 Around the Vänern lake in 3 days (580 km) in Sweden was the first cycling event this year. Weather was sunny, but windy and the last 250 km we had to cycle against strong headwind. All in all the event was very social, because everybody had to cycle in a group. I was only Finn at my group and during 3 days I learnt many new Swedish words like rumpa, kissa, omkörning, alla med, bil bakom, möte, hål, etc... 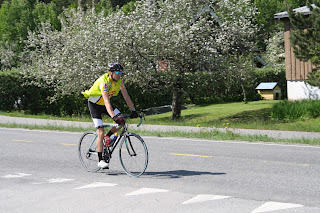 170 km behind at Telemark Tours

The second weekend cycling event was in southern part of Norway, Telemark Tours (250 km) in Skien. The scenery in this birthplace of Telemark was absolutely stunning. Uphills were steep and long and downhills as well. All went well, but at the same time on the other cycling event in Norway "Bergen - Voss 170 km cycling tour", there were fatal accident, when 48 - year old Norwegian cyclist died after 40 meter drop.

The longest uphill took from me 35 minutes to cycle up and at the same time it started to rain. When I was coming down the serpentine road nearly at 60 km/h at rainy and slippery road, I felt time to time a bit uncertain...

This has been absolutely the most beautiful cycling tour I have ever participated. The views were just stunning!

Now it's time to sleep, recover and recharge the energy for Jukola orienteering relay within two weeks in time.